DEVELOPMENT OF Ozone TECHNOLOGY AND APPLICATION

After the discovery of Ozone by Christian Friedrich in 1839, scientists and engineers fixed a wide variety of possible application of Ozone. For example 100 years ago, a certain number of water treatment plants were utilizing Ozone for disinfection; thus minimizing the risk of dangerous diseases caused by bacteria in the potable water.

Figures 1&2 give an impression how the market for Ozone application in Germany and the USA has developed (1, 2). The tendency for more Ozone plants with higher Ozone production started about 20 years ago, and the trend for Ozone applications has spread from Europe to North America and around the globe. 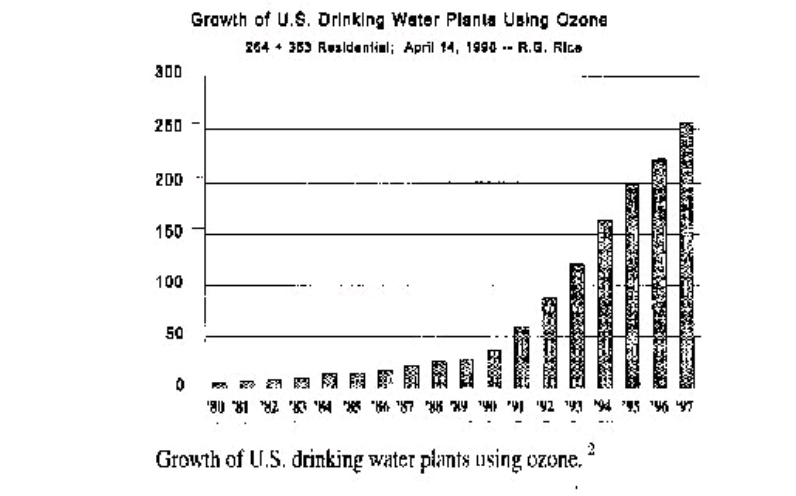 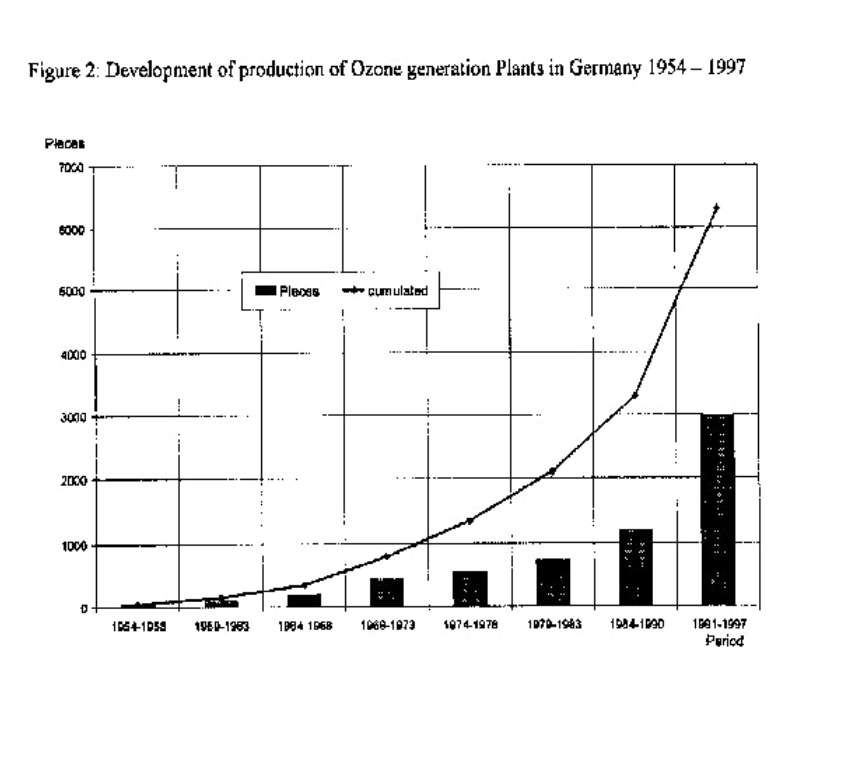 IMPACT OF OZONATION ON WATER QUALITY

Natural organic matter (NOM) strongly influences the Ozone demand and disinfection by-products production of natural waters. NOM occurs ubiquitously in natural waters and represents a heterogenous mixture of organic compounds. Drainage basin characteristics such as vegetation density and diversity, soil types, geology, and precipitation influence the nature of NOM entering drinking water supplies. The streams, lakes, aquifers and rivers also play an important role in influencing the nature of the NOM.CASE: High levels of NOM in surface waters in Eastern Germany caused the violation of THM-standards while using chlorine for final disinfection. The Ozone treatment reduced the high organic concentration by 25 to 30 %. As a result the THM-formation was reduced, too (3) 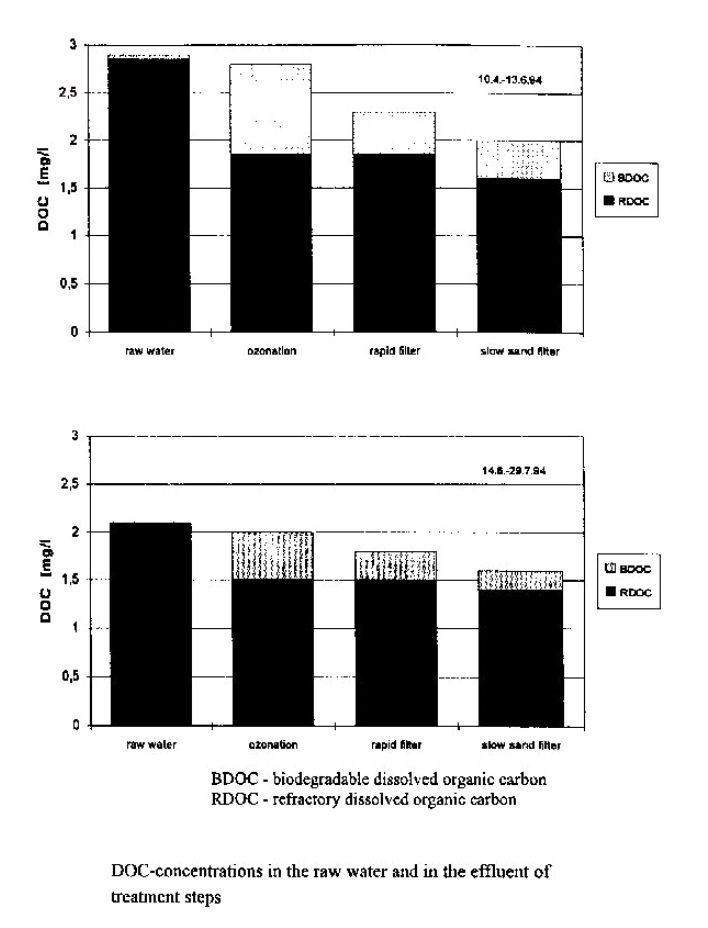 The chlorine used to disinfect water reacts with naturally occurring organic matter in water to form chlorinated disinfection by-products (CDBPs). Trihalomethanes (chloroform, chlorodibromomethane, bromodichloromethane, and bromoform) are a major group of these CDBPs found in Canadian drinking water supplies. Regulation in USA requires large utilities to meet a MCL (Maximum Contaminant Levels) of 0.010 mg/L of the total of the four THMs. Canadian guideline for THMs : 100 parts per billion
CASE 1

US EPA had surveyed waters produced at 80 US water utilities, sampling their finished waters and analysing for the four THMs. Only two of the surveyed plants used Ozone. The National Organics Reconnaissance Survey (NORS) showed THM levels found at the two Ozone plants were the lowest of the other 78 plants. These results, as might be expected, were of great interest to the EPA (2).
CASE 2 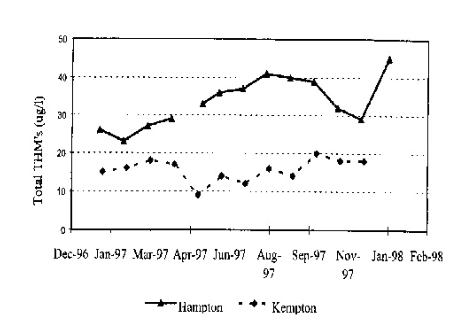 There is a clear difference between the two sites examined for THMs. Hampton water treatment works showed consistently higher concentrations of THMs than Kempton park. This demonstrated the superior Ozone treatment at KEMPTON park. The inclusion of Ozone increased the organic removal through the process and subsequently prevented THM formation.

Combining chemical oxidation, Ozone and biofiltration technologies are effective for removal of NOM and micro- pollutants such as pesticides (5) Conventional water treatment processes are not sufficient for the removal of several pesticides which are nowadays present in surface and groundwater sources. As a result, since the 1990s, an increasing number of waterworks worldwide are implementing ozonation as a more efficient treatment process. In many studies Atrazine is chosen as a model for its poor removal by conventional water treatment processes (6) 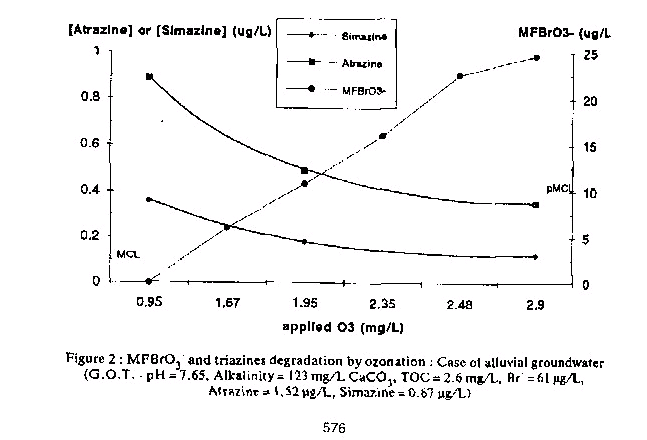 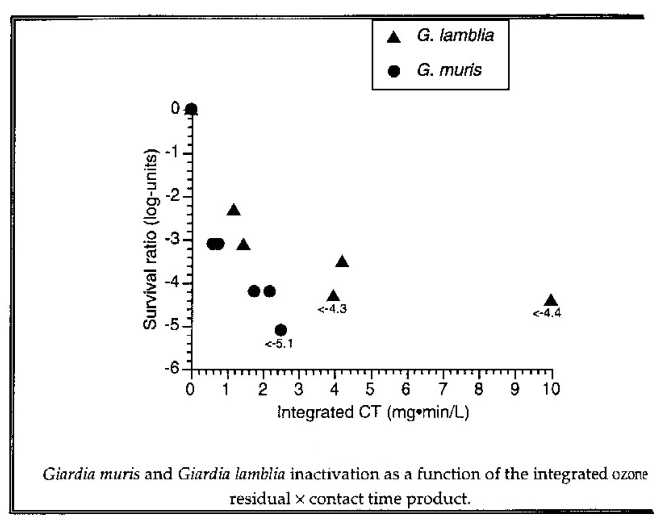 Identified as the most common cause of water-borne disease in North America, the removal of encysted parasites like Cryptosporidium and Giardia. has become a highly important water issue. Ozone can be used to inactivate these micro-organisms, despite their resistance to oxidation. They are difficult to remove by filtration because of their small size and are so resistant to chemical disinfectants that chlorine and chloramine have essentially no effect on it. (8). But Ozone have been proven to be effective as individual chemical inactivation of Cryptosporidium and Giardia.

The presence of trace amount of bromide in most natural raw waters has recently incited several research teams to specify the conditions of formation of bromates and other organobrominated by-products obtained after ozonation (11, 12, 13, 14). The more Ozone that must be added over a longer contact period, the more bromate ion formation can be expected, assuming the presence of bromide ion in the original water to be treated. 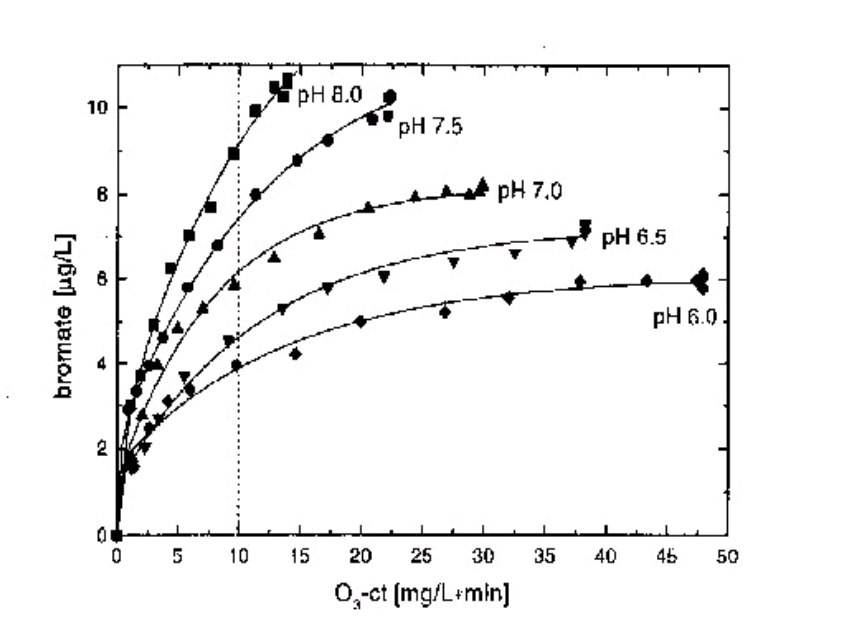 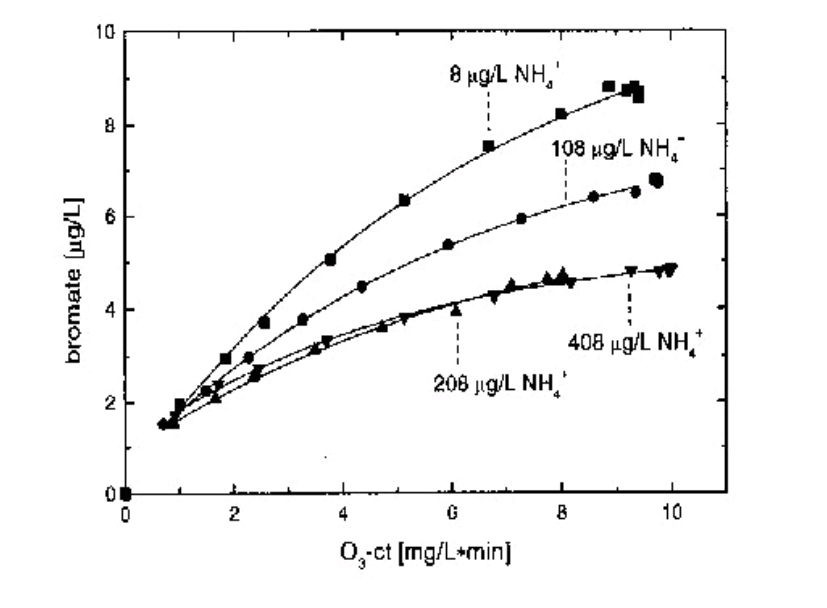 Figure 7: Removal of metals vs Ozone dose and contact time (15) 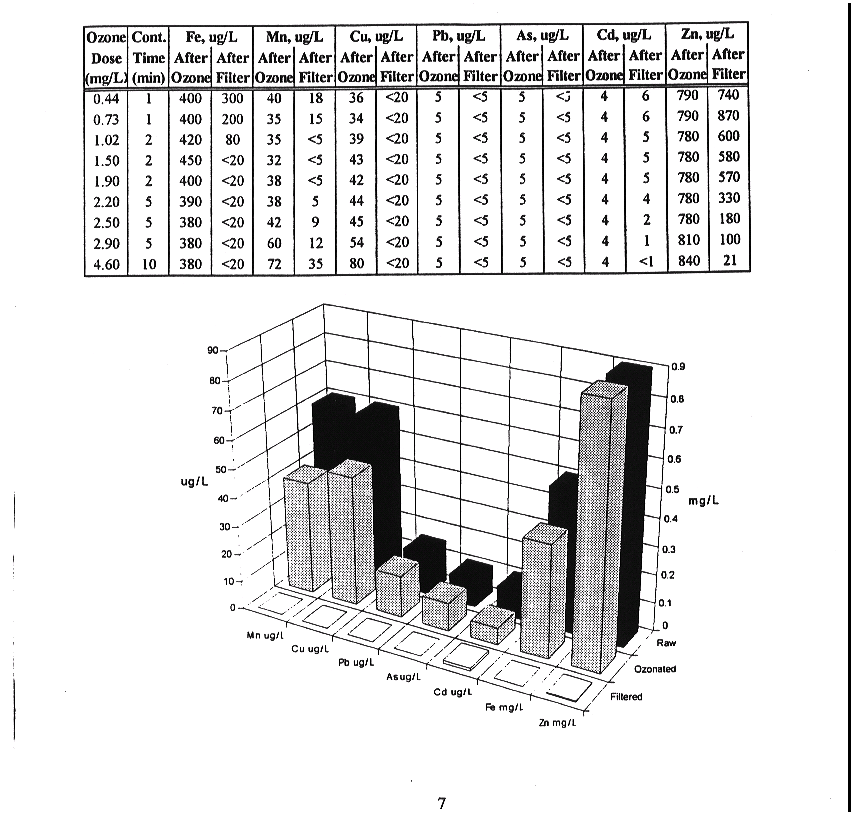 Figure 8: Typical particle reduction characteristics of Aluminum and ferric chloride with and without Ozone (16) 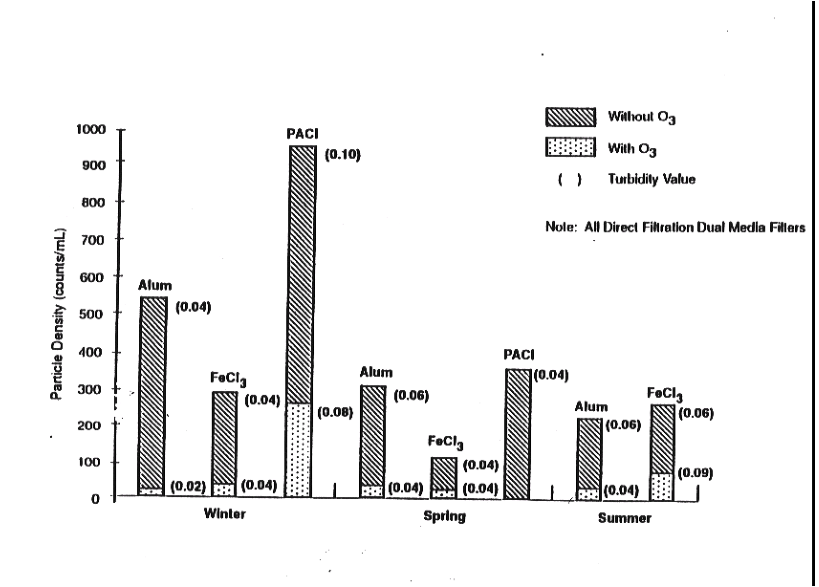 Over half of the plants using Ozone in Europe, USA, Japan, and Australia are small, many are using Ozone to treat groundwaters. In these instances, Ozone is used primarily for disinfection (bacteria and viruses) and for oxidation of such typical groundwater contaminants as iron, manganese, nitrite and sulfide ions and pesticides. Most of the much larger water plants using Ozone treat surface waters and apply Ozone for primary disinfection (Cryptosporidium, Giardia and virus inactivation), for oxidation of iron, manganese, taste and odor, color, and for lowering levels of disinfection by-product precursors. The current trend is for small community systems to use Ozone for the same purposes as the larger plants.