German DIN standards are the highest level of sanitation for pool water in the world. This standard is in accordance with drinking water standards. This is because water is absorbed by swimming pool patrons (approx. ½ litre/hour). The reasoning is if water is being absorbed by swimmers, then they should only be absorbing water that is fit to drink. Hence, the German standards are in accordance with drinking water treatment.

The process to produce German water standards is rigorous. The water in the pool is actually treated with Ozone on the way out of the pool. Ozone is then given time to do its work (referred to as the CT value – Concentration x Time) in an overflow pool, which is anywhere from 25 – 35% of the total pool volume. After sufficient time to oxidize organics, chlorine residuals, chloramines and other pollutants in the water, the water is then put through a mechanical filtration process. At the end of the filtration process is a GAC or Granular Activated Carbon (GAC) filter. This is a chemical filter that is designed to remove Disinfection Byproducts (DB’s). The Disinfection Byproducts are chemical hazards such as Trihalomethanes (THMs), chloroform, chloramines (bound chlorines) and other known carcinogens. These disinfection byproducts are formed mainly by Chlorine.

After the GAC filtration, a chlorine residual is added to the water before it is pumped back into the swimming 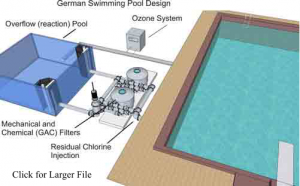 In the German model, the entire thrust of the standard is to not expose swimmers to the hazards of chlorinated disinfection byproducts (what we call bound chlorine in swimming pools) and to supply water to the swimmer that is in accordance with accepted drinking water standards. This is why the water is treated on the way out of the pool. Most of the harmful disinfection byproducts formed by the reaction of chlorine and organics are then done in a controlled manner in the overflow pool, where swimmers are not exposed to this process. Ozone can safely remove the bound chlorines, organics and other pollutants in a controlled manner in this overflow pool. Since only a slight residual of chlorine is used on the water flowing back into the pool, the levels of Trihalomethanes, chloramines (bound chlorine) and other chlorine disinfection byproducts are kept to a minimum (as per drinking water regulations).

North American pools are generally designed so that a high level of chlorine is added to the water flowing into the pool. There is generally no overflow pool for the controlled oxidation of organics and other pollutants and “breakpoint chlorination” is done to remove disinfection byproducts. In other words, the same technology that created the disinfection byproducts is then done at a very high level to oxidize them so the filters can remove them. This exposes pool patrons to high levels of chlorine, chloramines, THM’s and other pollutants inside the pool area. As well, chlorine off-gassing takes place in the pool facility itself. Generally, there is no accounting for exposure of the pool patrons to chloramines, bound chlorine, THM’s, chloroform and other disinfection byproducts in the pool design. The water in a typical North American swimming pool is not fit to drink under current drinking water standards because of elevated THM’s and other chemicals. 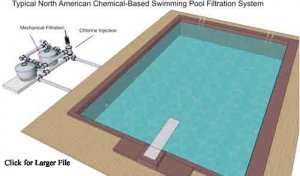 After World War II with the advent of chlorine, it was assumed that water safety concerns ie. E-coli and other serious water-borne bacteria would be a thing of the past. Conventional wisdom was that chlorine could be safely used in swimming pools to kill problem bacteria and simple filtration systems could be used to keep the water clear. Chlorine equipment was a low capital investment and gained most of the market share. Thus, most swimming pools were designed with a simple chlorination and filtration process and standards were set up accordingly.

With the recognition of problems with disinfection byproducts, most notably in drinking water standards in European countries, the emphasis shifted away from chlorine only models of water disinfection. While chlorination provided protection against bacteria, it also created a host of other health problems that are increasingly being recognized around the world. (Saskatchewan, for example, recently lowered the allowable THM’s in drinking water after studies showed an increased danger of miscarriage).

Most North American pool facilities can not afford to retrofit to the exacting German DIN standards. However, Ozone can still be used to reduce the overall ill effects of Chlorine and chlorinated Disinfection Byproducts in the pool water. This includes a significant reduction in overall chloramines, THM’s, chloroform and other bound chlorines in the water and effective reductions of chlorine off-gassing in the pool area.

Envron has designed an Ozone swimming pool retrofit that takes advantage of the existing filtration system without the need for the addition of large high-volume water tanks. Envron’s design reduces the overall chlorine requirements in the pool, reduces the chlorinated off-gassing that takes place in the pool and virtually eliminates the need for breakpoint chlorination or “shocking” the pool. Ozone also eliminates the needs for secondary chemicals for keeping scale out of pipes etc. As well, the pool filtration system is enhanced and water turns crystal clear and sparkling (overall pool turbidity is decreased dramatically.) 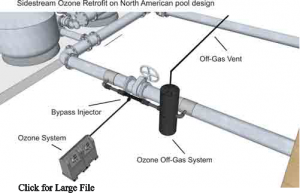 Sidestream Ozonation is used in numerous industries where Ozone is required to be added to large amounts of water and Ozonating the entire water stream would be impractical (which is the case in most swimming pool retrofits). Because the technology to accomplish this has been in use for decades, the application to pool water is straightforward. The equipment used to accomplish this is readily available and is simple to operate. An Ozone contacting/off-gas system is used to divert part of the flow of the main pool water to the Ozonation equipment. There, Ozone is added to the water and any Ozone off-gas is safely destroyed. The dissolved Ozone/water mixture is then returned to the main pool flow and the filtration system.

The advantages of Sidestream Ozonation include oxidation of organics, which then clump together and are able to be removed by the filtration system. Since Ozone is a micro-flocculent, the entire filtration system is much more efficient. Ozone will partially oxidize organics in the pool water. This means that the organics become “sticky” and will clump together. (This is done on a microscopic level). When organics clump together, they can then be trapped by the filter system. The water quickly becomes saturated with Oxygen and turns crystal clear and sparkling. Turbidity is decreased. The pool system is put in a constant state of “shock” and breakpoint chlorination is effectively eliminated. The levels of bound chlorine is reduced in the pool water. Chlorine off-gassing is also effectively eliminated.

Envron’s systems also allow an upgrade path. Once the basic sidestream Ozonation system is installed, it can be upgraded to an ORP-controlled system. ORP control means, in most jurisdictions, that a smaller residual of chlorine is required (ie. in some jurisdictions for example, maintaining a 650 ORP means that the free chlorine required drops from 2 mg/L to .6 mg/L.)