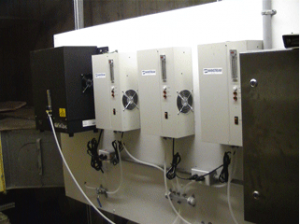 Since that time, Ozone systems have been used for hundreds, if not thousands, of commercial purposes. From water treatment to commercial bleaching, to dye removal to disinfection and removal of toxic chemicals from water streams, the oxidizing power of Ozone is an environmentally-sound solution in a broad range of industries.

Masking agents attempt to alter odors by adding a substance to the odorous gases. However, without a basic disruption of the odor control chemical bonding, the only thing masking agents do is to alter the odor, not remove it. To truly “destroy” odors, an oxidant must be applied. Usually Oxidants are caustic chemicals that are used in conventional “scrubbing” plants that spray chlorinated water through the air stream to “scrub” the chemicals from the airstream and break them down in the water. Besides the huge capital expenditures, these plants contribute to water pollution and environmental compliance problems.

Envron has developed odor control systems that can be safely and effectively applied inside hog, poultry, composting operations and others. Recent testing by the University of British Columbia in conjunction with the British Columbia Ministry of Agriculture through the use of an odor panel has found that Ozone will completely eliminate composting odors. As well, Envron’s work with hog barns and poultry operations shows that Ozone will eliminate even the most penetrating hog barn odors.

Envron’s Ozone systems employ state of the art Corona Discharge Ozone Generators combined with Oxygen Concentrators. These systems are low maintenance, trouble-free systems that provide the required dosages to eliminate the most offensive odors. They can also be operated in adverse environmental conditions (check with us before installation). These systems can be combined with Ozone sensors to keep Ozone levels below Occupational Health and Safety levels (usually .05 ppm for an eight hour exposure) in a populated workplace. If odor control is required in ventilation systems (ie. no human exposure), Ozone levels can be adjusted according to the level of odor control required.

Ozone in air is also disinfectant. Recent testing with Envron’s systems at the University of Saskatchewan, Poultry Sciences Division, has shown that Ozonation at below Occupational Health and Safety limits reduced airborne bacteria levels by 44%. And this was in a warm, populated, well-ventilated poultry barn operating in the summer.