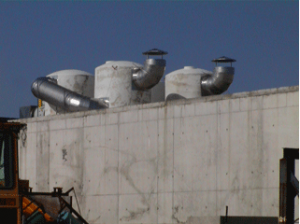 Envron co-operated with the Canadian Mushroom Growers Association, the Canadian Federal Government, Provincial Government and Greenwood Mushroom Farm on a full-scale mushroom bunker composting odor control project at Greenwood Mushroom farm. This work was based on earlier work conducted with the British Columbia Ministry of Agriculture that showed positive odor control with Ozone and mushroom compost.

The installation of the odor control system resulted in the settlement of a $10 million lawsuit launched over the odors from the farm. At this time, Greenwood is expanding the Ozone system to several more bunkers.

The mixing/retention system is designed to provide maximum mixing of the compost exhaust and Ozone so that both gases are thoroughly entrained. The Ozone/exhaust mixture must pass through a three-phase mixing/destruct process.

A study was commissioned by the Canadian Mushroom Growers Association using a consulting firm. When the Ozone system is not engaged, the full composting odor is noticed coming through the stack. When the Ozone system is engaged, the stack has a noticeable Ozone smell which indicates the odors have been eliminated. The report concludes: “Overall, the ozonation system installed at Greenwood Mushroom Farm can control the emission of odour compounds.“ 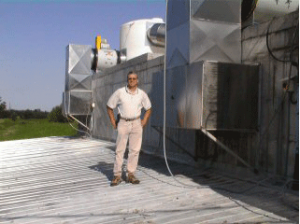 These results are confirmed in the work done by the University of Britsh Columbia which measured the output from a Surrey, B.C. mushroom composting facility. This system treated gases coming from a composting stack. In this case, a full-blown odor control panel was assembled. There was a residual Ozone smell coming from the destruct stack when tests were conducted. The results of that study with the odor panel showed that the untreated samples required dilution rates of between 1701-3043, which is typical of odorous substances. The Ozone treated samples dilution rates were between 209-264, which is typical of non-odorous substances. As well, the treated samples actually smelled like Ozone which has an almost antiseptic or sanitary smell. 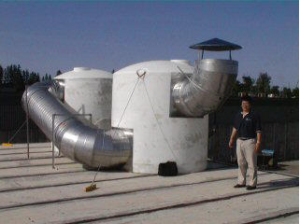 When Envron initially designed the system, the objective was to provide a quantified amount of mixing time at maximum exhaust flow levels and to achieve a residual concentration of Ozone. The residual Ozone concentration indicates that the entrainment of the gases is complete and that not all the Ozone has been used up in the mixing/destruct process. This indicates that the Ozone will continue to react with the exhaust flow and provide further oxidation as the dilution of the gases continues.

Allan Finney, Envron Environmental Ltd. designed and installed the mushroom odor control composting system at Greenwood Mushroom Farm in 2003 after an odor panel test on an earlier Envron system conducted with the British Columbia Ministry of Agriculture. The final system report was conducted by G. Duns, Ph.D. A link to the full report is provided here:

“Overall, the ozonation system installed at Greenwood Mushroom Farm can control the emission of odour compounds. Chemical analysis of samples of mushroom substrate gases taken before and after contact with ozone indicated that levels of odorous sulfur compounds were reduced in the range 20-60% by the ozonation. The extent of this reduction appears dependent on the operating conditions of the bunker.

he present study has utilized chemical analysis to test the efficacy of ozonation as a viable means of odour control. The ultimate evaluation of any system for controlling or reducing odours is performed using a combination of chemical analysis and organoleptic or odour panel assessments of the odours (Dorling, 1977; Duns et al., 2003). Relating results from chemical analysis to odour panel measurements converted to odour units is ideally the most informative way to quantitatively relate constituent odour target compounds to human assessment of odours…..”

& Ontario Ministry of Agriculture and Food