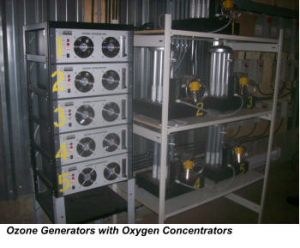 Ozone is the unstable, highly reactive triatomic form of Oxygen. Oxygen is O2 while Ozone is O3. In order for Oxygen to form into Ozone, Oxygen molecules must be “pulled apart” and reformed. This takes energy in the form of electrical excitation of Oxygen which pulls apart Oxygen molecules. This is usually accomplished with High Voltage (Corona Discharge) Ozone Generators. Once pulled apart, most revert back to the stable form of Oxygen. However, some of the Oxygen is converted into Ozone in this process. Ozone is a colorless gas with a typical antiseptic smell. Ozone must be treated with respect as it is a very powerful oxidizing agent.

Once formed, Ozone is an oxidizer that will react with organics or, over time, naturally decay back to the more stable form of Oxygen. However, once Ozone is formed, it can be put to work as a very aggressive oxidizer and sanitizer. Producing Ozone is relatively easy with the advent of reliable, cost-effective Ozone Generators. Ozone cannot be stored, it must be used on-site when and where it is produced. Ozone Generators produce Ozone out of Oxygen (either air or concentrated Oxygen) and, as such, there are no on-going costs for chemicals or other inputs into Ozone Generators other than electricity.
How Ozone is Produced

Ozone Generators are used to “manufacture” Ozone out of one of the most readily-available substances on earth – Oxygen in the air. In fact, Ozone has been called “Enhanced Oxygen” for the simple reason that Oxygen (O2) can be converted to Ozone (O3). Ozone is produced naturally in the upper atmosphere (the Ozone layer) through ultraviolet radiation. As well, lightning will produce Ozone through electrical excitation of Oxygen molecules. Ozone Generators use both forms of producing Ozone. Some generators will use electrical fields (corona discharge) to produce Ozone. Others use ultraviolet lights (UV method) to produce Ozone. The end result is Ozone. There is no inherent advantage or disadvantage in either method, although Corona Discharge generators are generally regarded as more cost-efficient. Since Ozone cannot be stored, it must be used as quickly as it is produced. Ozone Generators are used to produce Ozone at the location where it will be used. Ozone Generators come in all sizes, ranging from small DC units used to clean air in your car to large industrial systems used to purify Millions of Gallons per Day of water in municipal water treatment systems. Since they require no chemical inputs, they are very cost-effective in long-term applications.
How Does Ozone Work?

Ozone is classified as an “oxidant” or a substance that converts organic material into their base compounds. Other examples of oxidants are chlorine and fluorine. Ozone can be put to use to convert air borne pollutants such as ammonia, mercaptans, sulfides and other organic chemicals into inert, non-odorous by-products. As well, it is a very effective disinfecting agent and will kill germs, viruses, bacteria, molds and yeasts. Ozone is an extremely fast-acting oxidant. It is these unique characteristics that allow Ozone to be put to use in agricultural operations such as swine or poultry barns. After oxidizing substances, Ozone then simply reverts to Oxygen. The target substances are broken down into their base components. There is no magic in the application of Ozone. It is a chemical process that is predictable and well understood by Chemical Engineers, chemists and, increasingly, doctors around the world.
Ozone – In Use for Over a Century

For the past 100 years, Ozone has been used commercially for odor reduction and water purification. This substance is also a very effective anti-bacterial, germicidal and fungicidal agent. It is classified as an “oxidant” or a substance that converts organic material into their base compounds.

Other examples of oxidants are fire, chlorine and fluorine. In Europe, the use of Ozone has been readily accepted for water treatment, waste water treatment, air purification and is now gaining attention for medical treatments. Ozone was first used commercially in France in the late 1800s in a slaughterhouse to control odors. Ozone is equally effective at treating impurities in air or in water.

The name “ozone” is derived from the Greek word “ozein” which means “to smell”. Ozone is a bluish, water-soluble gas with a distinctive smell. The use of Ozone leaves no toxic by-products or residues and is non-carcinogenic. Ozone occurs naturally in the environment. In nature, oxygen is released from plants and sea plankton during photosynthesis. Oxygen floats upward into the atmosphere and in turn is converted into ozone by ultraviolet radiation.

This blocks out the harmful UV b rays that cause skin cancer. The production of ozone is dependent on the amount of the sun’s energy. This helps explain the shortage of ozone over the poles in the winter months when there is a lack of sunshine. Ozone, being heavier than air, is carried in downdrafts into the lower atmosphere. As the ozone falls it oxidizes any pollutant or contaminate with which it comes into contact, turning it into a safer compound.

If ozone comes into contact with water vapor during storms it forms hydrogen peroxide. This is why plants flourish better with rainwater than with irrigation water. This is natures way of cleaning our environment. “Natural” ozone concentrations can vary between .01 ppm to .05 ppm, depending on geographic location, altitude and season.

The cycle of oxygen and ozone is just like the cycle of water in nature. Ozone is also created by waterfalls, the oceans’ surf and during thunder and lighting storms with concentration levels triple the allowable limit, as set by EPA. Ozone created electronically or through ultra-violet light converts molecules of Oxygen (02) into molecules of Ozone (03). This is sometimes referred to as activated oxygen, triatomic form of oxygen or pure air.

Being an unstable gas, ozone’s life span ranges from 20 to 80 or 90 minutes, depending mainly on the temperature. After completing its job, it reverts back to oxygen. This means ozone has to be produced on site. Ozone is second only to fluorine as the most powerful oxidant in the world. It’s the most powerful, natural air and water sanitizer readily available. Ozone will break down chemicals into their basic naturally-occurring component parts. After time they are eventually broken down into water, carbon dioxide, sulfur, nitrogen and oxygen.