Envron’s Odor Axe™ is the most effective odor killer on the market. It’s a proven technology with an amazing track record. 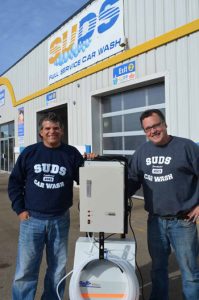 The original Suds Car Wash trials in 1992 were an outstanding success. Systems are now used on vehicles, motorhomes, apartments, houses, tractor trailers. Anywhere there’s residual odors the Odor Axe™ is built to handle the job. Ozone is the single most effective odor control agent in the world. Envron’s odor control systems have been installed in large installations including the Adena Beef Processing plant in Florida.

The Odor Axe™ does not mask odors it eliminates odors. It does this with a proprietary Ozone system that disassembles odorous molecules. Ozone is the fastest acting commercially available oxidizer on the planet.

This system has eliminated odors including skunk, cigarettes, cigars, gasoline, diesel, dead mice, spilled milk, urine, fecal odors – you name it and chances are the Odor Axe™ has been used on it.

But don’t take our word for it – book your appointment today and we’ll prove it to you. Guaranteed.