Envron has developed odor control systems that can be safely and effectively applied for composting, rendering, hog, poultry, wastewater operations and other odors. It is the most economical large-scale odor control system on the market. Ozone is manufactured on-site so there is no need to buy chemical additives. It works in conjunction with your existing ventilation or containment system.

Ozone is the fastest-acting commercial oxidizer available. Unlike chlorine or other chemical-based oxidizers Ozone works in seconds and does not require scrubbing technology.  Ozone is used to reduce substances to their base chemical components. This is important as the truly offensive “penetrating” odors are caused by combinations of various gases. Many of these substances, in isolation, are not odorous. It is when they combine that they become “penetrating” or truly offensive. 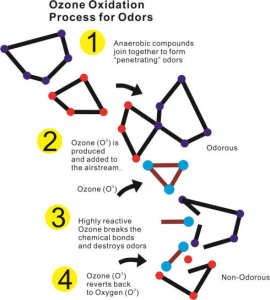 Ozone is incredibly effective against odors because these odors are actually long-chain chemicals with relatively weak bonds. Since Ozone will react almost instantly with these types of chemicals, odors are the first to be destroyed in what is known as “instant” Ozone demand.

Testing by the University of British Columbia in conjunction with Envron and the British Columbia Ministry of Agriculture through the use of an odor panel has found that Envron’s Ozone system definitely eliminates composting odors. This system has since been adapted to work with rendering, wastewater, hog, poultry and other commercial applications.

Ozone is used to disrupt odors by breaking down combined substances into their base components. Most of these odorous substances can be found within the sulfides, mercaptans and amine groups. By breaking the bonds of these chemicals through oxidation, the odors are eliminated. Ozone is not a masking agent.

Masking agents attempt to alter odors by adding a substance to the odorous gases. However, without a basic disruption of the odor control chemical bonding, the only thing masking agents do is to alter the odor, not remove it. To truly “destroy” odors, an oxidant must be applied. Usually Oxidants are caustic chemicals that are used in conventional “scrubbing” plants that spray water through the air stream to “scrub” the chemicals from the airstream and break them down in the water. Besides the huge capital expenditures, these plants contribute to water pollution and environmental compliance problems.

Since that time, Ozone systems have been used for hundreds, if not thousands, of commercial purposes. From water treatment to commercial bleaching, to dye removal to disinfection and removal of toxic chemicals from water streams, the oxidizing power of Ozone is finding a home in many industries.

Envron’s Ozone systems employ state of the art Corona Discharge Ozone Generators combined with Oxygen  Concentrators. These systems are low maintenance, trouble-free systems that provide the required dosages to  eliminate the most offensive odors. They can also be operated in adverse environmental conditions (check with us  before installation).

These systems can be combined with Ozone sensors to keep Ozone levels below Occupational  Health and Safety levels (usually .05 ppm for an eight hour exposure) in a populated workplace. If odor control is  required in ventilation systems (ie. no human exposure), Ozone levels can be adjusted according to the level of odor  control required.

Ozone in air is also a disinfectant. Recent testing with Envron’s systems at the University of Saskatchewan, Poultry  Sciences Division, has shown that Ozonation at below Occupational Health and Safety limits reduced airborne  bacteria levels by 44%. And this was in a warm, populated, well-ventilated poultry barn operating in the summer.

Traditional odor control “scrubbers” are expensive to set up and operate. As urban sprawl continues, there are  inevitable conflicts between agriculture and residential concerns. And a lot of the issues revolve around odors. To  some people it’s the “smell of money”. But to the neighbors, odors can spoil a family barbecue or force people  indoors on a sunny day. Envron has successfully used Ozone in large scale mushroom composting, hog barns,  poultry barns, vehicle and home odor remediation and disinfection applications with excellent results.

Ozone has been used for over a century for odor control. One of the first applications for Ozone was to control odors  from a slaughterhouse in Nice, France in the 1890s. Since then, Ozone has been primarily used in Europe both in  water and air pollution control. Its use in North America has grown dramatically in the last 10 years, largely through  the development of micro-electronics, smaller generators and advanced Ozone engineering.

Ozone is generated through the use of Ozone Generators. These machines strip Oxygen out of the air and pass it  through an electrical discharge (corona). This converts Oxygen (O2) into Ozone (O3). As such, there are no on-going  input costs for chemicals or other consumables. As well, if the system is properly set up maintenance is nominal.  Generators are designed to run continuously or on intermittent schedules.

The British Columbia Ministry of Agriculture hired Envron to demonstrate the use of Ozone for controlling odors from  a mushroom composting facility. A number of complaints had been made and the facility was in danger of being shut  down.

The Ministry of Agriculture evaluation of the technology can be summed up quite succinctly: when properly applied,  Ozone kills odors from mushroom composting facilities. A commercial scale installation that also had an independent  study further confirmed this finding.  In order to understand how Ozone does this, a look at the properties of Ozone is  in order. Ozone is in a class of chemicals called oxidants. Oxidants are substances such as chlorine, fluorine, hydrogen  peroxide and others. This group breaks down organic substances into base compounds. Ozone is one of the fastest  acting Oxidants known and very quickly converts organics into inert substances. Odors in the air are simply organic  compounds that are “tasted” by the nose. Break those compounds down into something else and the odors  disappear.

So what exactly causes the “bad” odors in a composting facility? Envron’s research into hog barn odors shows that  the really penetrating odors are only a very small portion of the total gases being released by the barns.

These “worst offender” odors are typically sulphur-based and produced in an anaerobic process. However many of  these sulphurous substances by themselves are not offensive. That’s right. They don’t stink by themselves. They  need some of the others to form that truly unforgettable bouquet. So if you can disrupt the sulphur-based compounds,  most of the smell will be killed immediately.

So how do hog barns compare to mushroom composting facilities? Quite simply, the hog barns and mushroom  composters all produce some gases through anaerobic processes. And it is these sulphur-based gases that are truly  offensive. Ideally, in an odor control application you destroy the anaerobic gases and also decrease the rest of the  “non-problem” gases for good measure. As it turns out, Ozone is well suited to this task.

Which is exactly what happens in hog barns. Using Ozone in a hog barn, the first thing to go is the “typical” or  penetrating smells associated with the barns. The question in B.C. was, would this also hold true for mushroom  composting facilities? Envron determined that by seeing a reduction in Amines, it would also be evident that the  sulphur-based compounds were being eliminated as well (it is very hard to detect trace amounts of sulphur  compounds).

In order to determine if this would happen, a “destruct stack” was set up at the composting facility. This stack was  used to draw air from a tent built over the compost heap and push it down a 110-ft section of 8 inch ductwork.

As well, an odor panel was set up by Monty Bruce, an Environmental Engineer from the University of British Columbia  to see if the results could pass a rigorous odor panel test.

The odor panel tests are double-blind experiments in which people are given measured odorous gases or non- odorous gases to sniff through a machine. As the human nose is very sensitive (and also the ultimate test in odor  control) the panel indicates whether people would find the odors offensive or not. The odors are then diluted by the  machine to see at what levels it becomes non-offensive.

After running the tests using the destruct stack, Envron found an average decrease in total Amines after 48 seconds  contact time of 21%. After 303 seconds an average decrease in total Amines of 59% was found. Everyone at the test  site sniffed the gases coming out of the stack with Ozone applied and without Ozone applied. Without Ozone  everyone agreed that the gases were odorous. With Ozone everyone agreed that the smell was gone.

The reductions in Amines indicated that within a number of seconds, there should have been a very high reduction in  sulphur compounds as well. With the sulphurs gone, the odors should be killed as well. But would the odor panel  agree?

After the tests came back from the UBC, the odor panel had indeed confirmed the on-site “sniff” tests. The untreated  samples required dilution rates of between 1701-3043, which is typical of odorous substances.

The Ozone treated samples were between 209-264, which is typical of non-odorous substances. As well, the treated  samples actually smelled like Ozone which has an almost antiseptic or sanitary smell.

These results are consistent with other commercial uses for Ozone. One of the major markets for Ozone generators  in North America is sewage lift stations. Odors at lift stations result from anaerobic processes and Ozone kills these  odors quite readily.

From work in hog and poultry barns, Envron had already seen Ozone’s ability to quickly kill even  very penetrating odors. The big trick in applying Ozone is to get the Ozone and the odorous gases mixed. This can be accomplished in an  open air facility through the use of a ventilation system that pushes Ozonated air across the tops of the compost. Or if  the composting facility is enclosed, Ozone can be added to the ventilation system at the exhaust.

A “destruct stack”  can also be added to ensure adequate mixing of the air and the ozone. If the composting is done in an open-air facility, the Ozone Generators should be slightly oversized to compensate for  a less efficient odor/Ozone mix. If the gases are exhausted through a ventilation system, then the generators can be  downsized accordingly